The following article was written by Deaconess Edie Eickemeyer, with input from “my classmates, more seasoned deaconesses, a couple of theology department colleagues of Professor Korby, the wife of a former theology professor, the internet, and the VU Archives.”

A LOOK AT THE LIFE, MINISTRY, AND THOUGHT OF THE REV. DR. KENNETH FREDERICK KORBY

After graduating from Concordia Seminary, St Louis, with both Bachelor of Arts and Master of Divinity degrees, Kenneth Korby was ordained on the Feast of St. James the Elder, 1948, in St Paul, MN, where Kenneth served as Assistant Pastor.  (An interesting note:  Pastor Herb  Lindemann, who ordained Kenneth, took a call to Redeemer Lutheran Church in Ft. Wayne in 1951 and while there served for several years on the LDA Board.)

Kenneth left a pastorate in Oregon to come to Valparaiso University as Associate Professor of Theology in 1958.  In addition to more than 20 years as a teaching member of VU’s theology faculty, he served the VU community as Interim Director of the Deaconess Training Program from 1958-1960; Chairman of the VU Chapel Committee for 3 years with obligations in planning, preparation and carrying through the worship life of the campus; Director of the VU International Study Center, Reutlingen, Germany; Director, VU Youth Leadership Training Program; Editor of the Cresset for 5 years; and he announced the home football games. While a member of the Theology Faculty at VU he earned a Master of Sacred Theology from Yale Divinity School and a Doctor of Theology from Concordia Seminary-in-Exile.

According to a couple of respected deaconesses, students at Valpo in the late 1950’s, after Deaconess Hall opened, Professor Korby was very influential as an advisor to deaconess students. To give the Executive Director, Rev. Arnold Krentz, some assistance with the teaching and counseling of deaconess students, Prof. Korby was named Resident Counselor by the Board of Directors of the LDA. His responsibilities included teaching the course, “The Field of Deaconess Work,” as well as “giving needed counsel to all deaconess students as related to their academic and training requirements …..” The Field of Deaconess Work class is where we learned about what it meant to be a deaconess and received suggestions for doing our ministries.”  As Resident Counselor, Professor Korby was involved with students when challenges arose, and discipline was meted out.

Another Deaconess on campus in the late 1950s recalls the presence of an energized atmosphere among the theology faculty and theology majors, including a significant number of deaconess students, conducive to stimulating conversations and relational learning experiences.  Such dialogue that included women talking theology was not all that common in the Lutheran Church in those days.

Prof. Korby was commissioned by deaconess students to write what we know as The Deaconess Litany, for use during worship in the Deaconess Hall Chapel.  His interest in the catechism, personal prayer, intercession (“This is truly the work of God’s priestly people);” and love of Matins and Vespers is reflected in this treasured prayer.   Though revised several times since its introduction in 1959, The Community continues to use the litany in its totality or in parts, at Annual Meetings, Monday evenings on a conference call, in personal devotions or at Area Meetings.  It’s been a true gift to our community.

In the mid-’60s, Professor Korby taught a course based on The Book of Concord.  For him, this was a valuable resource as a document for meditating and a rich resource for catechetical instruction.  He suggested to YLTP-ers that it be on their annual reading list.  Luther’s Small Catechism tutors the Christian in repentance, faith, and holy living. Prof. Korby also maintained that the Bible, a Lutheran hymnal, and the Catechism are the three books to be in each Lutheran’s library.

Kenneth was the first celebrant at Valpo’s magnificent chapel.  He handled the liturgy as a skilled workman at his trade. For Professor Korby, clericals were work clothes, and cowboy boots were 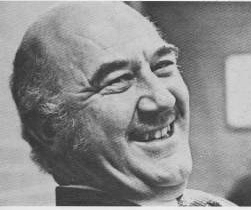 his favorite work boots. When chasubles became the fashion rage among the liturgical set, he rejoiced.   He loved their seasonal colors and how they made the pastor a billboard for the church year, in which he, ever the teacher, took great delight.

Comments from a few of his colleagues shed additional light on this memorable mentor:  As a new member of the theology faculty, a colleague recalled having his first class right next to Prof Korby in Greenwich Group on old campus.  The “big voice” of Prof Korby easily passed through the walls of that building so the new prof simply said to his class, “I think we’ll just sit and listen to him for a while.” Another colleague said, “I remember him as kind of a loose cannon.”  Yet another said he was passionate about theology and particularly about the practical application of theology for students and the church.

Kenneth and his wife Jeanne parented three children. His lectures were full of references to his own family life, the Word of God, catechism, prayer and vigorous singing around the dinner table.  They struggled with sin and weakness, like any family, but learned the art of living under the gospel with confession and absolution at the center of the home.
Professor Korby’s influence continued after graduation and consecration for Deaconess Edie Hovey.  She was serving a church in Meriden, CN while he was at Yale.  When she received the call from the LDA to be Deaconess in Residence for Deaconess Hall, she consulted with him and he was influential and supportive of her decision to accept the call.

Dr. Korby studied German theologian and Pastor Johann Konrad Wilhelm Loehe – believed to be the founder of the deaconess movement within Lutheranism.   His chief concern was that a parish find its life in the eucharist; and from that source, evangelism and social ministries would flow.   Loehe’s thought helped shape Korby’s understanding of the church as a Living Organism of rescuing love. He discovered in Loehe one who thought theologically about pastoral care and sought to practice it as a theological discipline, in contrast to the growing trend of the middle and late twentieth century that reduced the care of souls to counseling and relied deeply on psychological theory rather than traditional theological categories.  He titled his thesis “The Theology of Pastoral Care in Wilhelm Loehe with Special Attention to the Function of the Liturgy and the Laity.”

In 1980 when Dr. Korby left VU to serve as pastor of Chatham Fields Lutheran Church in Chicago he wrote. “What I’ll miss most of all is worship life here, which has been very precious, very valuable to me.”  “The people in the congregation will help us learn how to live and work there.  I get a chance to again work at those things I’ve been teaching in the area of church, congregations and Christian life.”

For the Rev. Dr.  Korby prayer was a dialogue between the Speaking God and listening believers; between speaking believers and a listening God.  He suggested the use of Matins and Vespers as models for daily prayer.  He also suggested using the Our Father both as a prayer and as a structure for reflection and meditation. Through his writing, he encouraged personal Bible Study:
• Ask to whom is this word addressed?
• What does this text reveal to me about me, especially as it shows how God works with me?
• What does the text call me to do:  stand in awe, obey, repent, trust, pray, praise?
• What does the text promise me, call me to trust?
• Read for the illumination of your heart, the stimulation of your hope, the groundedness of your trusting Jesus, that Light of the World.
• Covet wisdom and pray for it.

In 2001 The Rev. Dr. Korby suffered a debilitating stroke that robbed him of most of his speech and left him partially paralyzed.  A parish pastor tells of visiting Kenneth and his wife in the nursing home in Port Angeles, Washington to mark the 55th anniversary of Dr. Korby’s ordination.  He had been this pastor’s teacher in catechetics and mentor in pastoral theology and practice.  Kenneth was seated in a wheelchair with a tattered copy of Luther’s Small Catechism and the Hymnal open to the service of Matins.  The visitor recalls that gone were all the tools of his trade as a pastor, theologian, and wordsmith.  What remained was what had always remained since the time of his baptism:  the Catechism and the hymnal.  What endeared Dr. Korby to many was that he believed and lived what he taught.  He taught and believed that the catechism could teach us to receive God’s gifts that come in His preached Word and Sacraments and how to live in the confidence of Christ’s forgiveness. 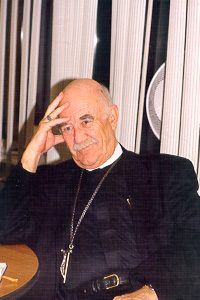 Kenneth Korby, a humble servant of Christ and His church, knew that Christ Jesus had redeemed him that he might be “His own and live under Him in His kingdom and serve Him in everlasting righteousness and innocence even as Jesus is risen from the dead, lives and reigns to all eternity. “ Kenneth knew himself a servant of the One who first served him. For Kenneth, there was magnificent freedom in slavery to Christ Jesus. It was the freedom to be courageous in confession, to exhort and admonish, to teach and to preach. It was the freedom to learn and to give of that learning to others.  He knew that all that he was and all that he had was pure gift from the Father of lights and that it was his duty to thank, praise, serve and obey the Blessed Trinity who created, redeemed and hallowed him to be His own.  This is most certainly true.