This week we feature a current story about Deaconess Corrine Vogel and her ministry of caring for foster children. Following are excerpts from an article published May 2019 in the Fairfield, CA 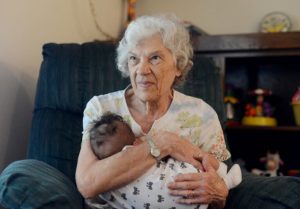 “Corrine and Roger Vogel knew the baby they agreed to foster had a heart condition. “But they didn’t tell us the whole story,” Corrine Vogel recalls. It was not until the little girl was settling into their home that the foster agency officials told them they should not expect her to survive her first year of life. They offered to take the baby back. That was not an option for the Vogels. At 14 months the infant had heart surgery. At age 5 the Vogels adopted her. She will be 46 on May 9. The Vogels have five of their own children and adopted six others.

Corrine and Roger have been foster parents to infants with special needs for 45 years. Come July, they will have been foster parents for 46 years, first in Pennsylvania and nearly 34 years in California. The couple has cared for 142 foster children, including the six they adopted. It also includes the infant girl – not yet 5 months old – who they are caring for now. They expect to take in No. 143 in the coming weeks. Roger Vogel is 76 years old. Corrine Vogel will turn 76 this year.

Nearly all of the children the Vogels have taken into their homes have been younger than 5, and most of those have had medical needs. The Vogels even had to be trained on how to care for several children using a feeding tube. And more than once, the Vogels have watched a child near death.

Corrine believes she has been given a gift of caring for children, and she does have a great deal of knowledge about medical needs. That training started as part of her theological studies at Valparaiso University. Corrine was consecrated as a Lutheran Deaconess on June 28, 1964. Roger Vogel also attended Valpo, but the two did not meet on campus. The Vogels met while living in Pittsburgh, Pennsylvania. They will celebrate their 50th wedding anniversary this year. They already had one of their own children when they fostered the first girl, who they later adopted. They would take in a set of three siblings, whom they adopted, and by the time they headed west to California, their family had grown to nine children.

The couple’s commitment to foster care also came west with them. “One of the first things we did was sign up to be foster parents,” Corrine said. Over the years, the Vogels added three bedrooms and a bathroom to their Fairfield, CA home so they could care for more children. At its peak, the house was filled with 13 children. Asked if he had ever thought enough is enough, that he and his wife have done enough, Roger pauses. “I don’t think we’ve reached that step, yet,”

Corrine Vogel said the truest gift she receives is watching these medically challenged children grow up. She said she cries each time one leaves the home, often adopted by a loving family. It is up to the new parents whether the Vogels are able to keep in touch. Corrine also teaches a class for future foster parents.”

Valparaiso University awarded the Vogels the Distinguished Alumni for Community Service award in the Fall of 2016.

This link will take you to a television interview with the Vogels from May 2019: http://via.fox40.com/FNLhU