A bit early, but this week we commemorate Pastor Theodor Fliedner. 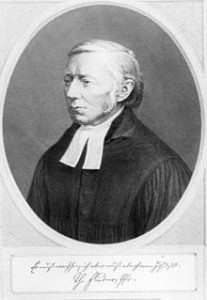 Theodor Fliedner was a German Lutheran minister and founder of Lutheran deaconess training. Fliedner was born in 1800 in Hesse, Germany. He studied theology and in 1821 he assumed the pastorate in the poor municipality of Kaiserswerth (now in Düsseldorf). When the town could no longer support church and ministry due to an economic crisis, he undertook journeys to collect donations.

He became acquainted with the ancient church office of deaconess while spending time among the Moravian Church, which had revived the institution in 1745. In England, he met with social reformer, Elizabeth Fry, who demonstrated her work among her nation’s impoverished and imprisoned people. He returned home not only with a large financial collection but also with new ideas about social work among the disadvantaged. He created programs to care for prisoners and their children upon their release and also to educate women to become teachers.

Using the model of the early Christian Church’s diaconate, ideas learned from Fry and the Mennonites, and his own thoughts, Fliedner developed a plan whereby young women would find and care for the needy sick. He created Kaiserswerther Diakonie, an institute where women could learn both theology and nursing skills. He opened the hospital and deaconess training center in Kaiserswerth on October 13, 1836. Gertrud Reichardt was the first deaconess commissioned by the new school. Florence Nightingale trained there as a nurse in 1850.

With second wife, Caroline Bertheau, they opened diaconal institutes in Dortmund and in Berlin. Because of these efforts, deaconess institutes arose in Paris, Oslo, Strasbourg, Utrecht, and elsewhere. By the time of his death in 1864, there were 30 motherhouses and 1,600 deaconesses worldwide. By the middle of the 20th century, there were over 35,000 deaconesses serving in parishes, schools, hospitals, and prisons throughout the world.

Theodor Fliedner is commemorated as a renewer of society in the Calendar of Saints of the Evangelical Lutheran Church in America on October 4.

DeacPost “Walk Gently Upon the Earth”

Rejoice in the Lord always; again I will say,...

DeacPost “Walk Gently Upon the Earth”

May we always walk gently upon the Earth, in...