Following are excerpts from a talk given by Dr. James W. Albers, VU Professor Emeritus, at the LDA Annual Meeting on November 3, 2018.  They continue the story of the 76-year relationship between Valparaiso University and the Lutheran Diaconal Association.

“The Relationship Established”
The first formal relationship between VU and the LDA did NOT begin in 1943, but in 1939, when VU engaged deaconess nurse, Freda Martin, to head up its new health center. The year 1943 did, however, mark the transfer of the LDA “training program,” as it was called then, to the Valpo campus. When the LDA agreed to relocate its program, it did so cautiously, calling it “experimental.”

“The Great Exchange“
In 1985 conversations about whether the LDA and VU could be mutually helpful resurfaced and led to property negotiations. After what has been reported as “hard bargaining,” the University agreed to provide the LDA with the residence of the Dean of Chapel on LaPorte Avenue and cash, in return for which the LDA ceded its building and surrounding land to the University.

For the LDA, the transaction provided a welcome relief from a variety of property and residential administrative issues, many stemming from the fact that more non-deaconess than deaconess students lived in Deaconess Hall. The move also meant the LDA gave up its residential formation program. The exchange, also, provided the LDA with financial stability, which caused the LDA to quickly launch into the strange and unfamiliar realm of investment strategies.

For the University, the exchange meant converting Deaconess Hall to an office building. It meant most of the humanities departments that had languished on the old campus could be brought to the “new campus.” The move virtually completed the transition of undergraduate programs and faculty to the new campus. Renamed Huegli Hall, the building also provided office space for the Dean of Arts and Sciences, The Cresset, and the Office of Institutional and Community Research.

In the fall of 1986, the building was rapidly refurbished and retrofitted. Shower rooms, storage rooms, and undeveloped spaces were converted into offices; some larger bedrooms were partitioned into individual offices, and strategically located restrooms had plumbing changes. This building provided welcomed space for community-building with its kitchen and dining areas. Coffee breaks, informal lunches, potlucks, faculty lunch and learn events, department and committee meetings, Core Course faculty cohort meetings, formal luncheons, Chinese New Year meals, “Church Vocations” meetings and similar events drew faculty and students from all over campus. Meeting areas accommodated small and larger groups, including the Faculty Senate. The former LDA living room created a friendly waiting area for students and on occasion a place for more formal university receptions. In short, Huegli Hall actually enhanced its functioning as a kind of faculty club. In my humble opinion, its warmth and atmosphere of welcome have remained unparalleled elsewhere on campus. 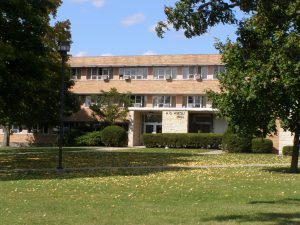 However, lest one over-romanticize life in Huegli, it is well to remember that even with renovations and retrofitting, the building retained, well, let’s say, its “peculiarities.” Those of us with offices on the third floor put up additional layers of plastic over the aluminum-framed, single-paned windows in winter. Those who tried to smuggle in space heaters blew their cover when someone else on the same circuit tried it and tripped the breaker, causing people to come running out of their office, frustrated because their computers went down. Summers were also a major problem until individual office air conditioners, known as “window shakers,” were installed, and we all knew that summer had not truly arrived until the hallways “molted,” that is, selectively shedding their ceiling tiles.

Though solid, the old LDA building was genuinely inefficient to operate. It was demolished soon after the new Arts and Sciences Building was completed. For those of us who watched its demolition from afar, it clearly did not go down easily.

During the three decades since “The Great Exchange” of 1986, there seem to have been no major transformative events in the relationship between the University and the LDA. The LDA continued to develop new modes or plans for the education and formation of diaconal candidates. The LDA also continued to provide communal and social events both for its own programs and even for the

University. For its part, the University continues to value diaconal students and makes its facilities available when larger venues are required for meetings and for the LDA’s annual fund-raising phone-a-thons.

While many more details and examples could have been included, we can say in conclusion that with evidence of seventy-five years of extremely cordial relationships and mutual support and enrichment, we probably should no longer refer to the arrangement as “experimental!”

While they were talking about this, Jesus himself...

Your word is a lamp to my feet And a light to my...

A bit early, but this week we commemorate Pastor...