Pastor Arne Kristo was born in Detroit, Michigan.  He graduated from Wayne State University in 1942 and Concordia Seminary, St. Louis in 1945.  He was the founding pastor of St. Matthew’s 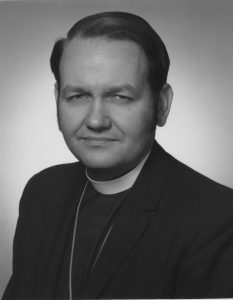 Lutheran Church in Harbor City, California and The Lutheran Church of St. Mark in Port Credit, Ontario.  He was chosen to serve as the first Vice President of the Lutheran Church – Canada at the time of its formation in 1958. Pastor Kristo also was a weekly speaker on the Southern California Lutheran Hour from 1948-1950 and Pastoral Advisor to the English District LWML from 1960-1961.

In 1961, he accepted the call to become Director of Training for the deaconess program at Valparaiso University, as well as an assistant professor in the religion department.  His responsibilities as Director of Training included: counseling students; structuring the deaconess internship year to “serve a definite educational purpose”; supervising the fieldwork program, including placements of graduates and interns; and “general advisor of secular activities”.   In his acceptance letter, Pastor Kristo said, “It will be a privilege for me to be associated with the Lutheran Deaconess Association in the training of women for professional service to Christ and Church through the office of deaconess”.

In 1968, Pastor Kristo became Executive Director of the Lutheran Deaconess Association.  In 1969, he helped usher in a decision that deaconesses and deaconess students could marry and still stay in the community and in the training program.  He also developed a set of guidelines for the LCMS that required a minimum starting salary ($5600/year) and benefits for called deaconesses.

Declining enrollments, financial worries, a lack of placements for interns and graduates, all caused Pastor Kristo to focus on improving and strengthening the image and reputation of the deaconess training program.  In 1970, he drafted a series of questions that the LDA Board needed to consider, in conjunction with Valparaiso University, that would address various concerns he felt were critical, especially as it related to the relationship with the University and the structure of the LDA Board.  He proposed the idea of selling Deaconess Hall to the University and using the funds to ensure the future of the LDA.  He also suggested that there be more deaconess representation on the LDA Board to “harness the intelligence, enthusiasm, interest, and loyalty of the deaconesses behind the work of the Board”.

In 1971, Pastor Kristo took a call to the Department of Pastoral Care at Lutheran General Hospital in Park Ridge, IL.  He then moved to Hampton Roads, VA  in 1972 to be the Executive Director of the Lutheran Council of Tidewater.

In his farewell to the LDA, Pastor Kristo wrote “As I leave my service with the deaconess program, I feel that the Lutheran Church-Missouri Synod has yet to come to terms with the status and role of women.  Women must be freed to develop and express their potential without artificial restrictions based on inadequate hermeneutical methods in interpreting Scripture.  Women should not be crucified on the basis of the elevation of one cultural setting to a norm for all time.  We have not gone far enough in our theological consideration of these matters.”

Former LDA Executive Director, Deaconess Louise Williams, in a 1980 letter to Pr. Kristo, remembers his leadership in these areas:  “1) the promotion of full participation and dialogue concerning the ordination of women to the pastoral office; 2) the encouragement that deaconesses consider ‘radical’ commitments to ministry and your experimentation in communal ministries and ministries in the inner-city; and 3) the pioneering work which you did in gathering together diaconates from various denominations which lead to the formation of Diakonia of the Americas”.