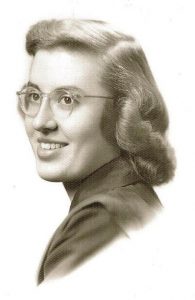 Shirley Groh was born in Mason City, Iowa. She heard about Deaconess work through students on the Valparaiso campus during her freshman year. She was impressed with the deaconess students and eventually felt called to enter the program.  Shirley served her internship in the summer of 1951 at the Lutheran Church in Centralia, Illinois and the summer of 1952 at St. Louis City missions in St. Louis, Missouri.

Shirley graduated from Valparaiso University in 1953 with majors in sociology/social work and religion and was consecrated on July 5 of the same year.  She then began work as Field Secretary for the Lutheran Deaconess Association in Fort Wayne, Indiana. At the July 1953 Lutheran Women’s Missionary League convention in Portland, Oregon, the LDA was awarded $60,000 to help build Deaconess Hall, thanks to the work of Shirley, who, while riding the train to the convention with other LWML women, lobbied the delegates to vote for this grant proposal.  Shirley served the LDA until her marriage to Maynard Dorow in 1956.

While her husband completed his M.Div. at Concordia Seminary, St. Louis, Shirley worked for a year for Lutheran Social Services in St. Louis as a caseworker.  In January 1958, Maynard and Shirley joined two other families in traveling to Korea to begin missionary work there.  They remained in Korea until 1998.  From 1970 to 1980 Shirley was a columnist/copyreader/editor with The Korea Times, an English language newspaper in Seoul. From 1975 to 1985 she taught at Seoul Foreign School, where she inaugurated a new program, the Junior Kindergarten program for 4-year-olds from around the world, and developed appropriate curriculum. She also taught ESL at The University of Foreign Studies in Seoul, and at Kyunghee University and Luther University in Shingahl, Korea. Shirley also served as a board member, teacher, fundraiser and advocate for AeRanWon (Girls Welfare Association) a home for birth mothers in Seoul and as a council member for the International Lutheran Church in Seoul. 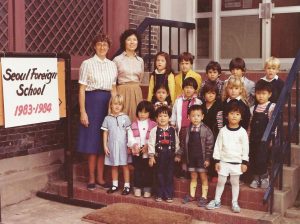 During their time in Korea, Maynard and Shirley were responsible for planting multiple congregations, developing men’s, women’s, youth and Sunday school groups and the creation of Luther Theological University.

While in Korea, Shirley received the Wichern Award. This award is named for Johann Wichern, a German pastor who set an example of care, concern, and compassion for the poor and laid the groundwork for renewal of the deaconess movement in the mid-1800s.  The Social Service Committee of the Lutheran Church in Korea established the award in 1967 to honor and encourage those committed to service in Christ’s name. Shirley received the 20th such award in recognition of her many years of loving and cheerful service as a missionary with the Lutheran Church in Korea.  The award also recognized her faithful efforts in evangelism, education and community service in Korean society.

Shirley and Maynard retired from the mission field in 1998 to Arden Hills, Minnesota, near children and grandchildren.  Shirley continues to be an active volunteer with civic, community and church organizations, including Jehovah Lutheran Church in St. Paul, Christian Friends of Korea, and has been a speaker for church and civic groups on mission work and the culture of Korea.

Shirley says, “The Lord has provided work to do, people to love. people to love me, and His Spirit’s presence. I am grateful for all these and thank Him for these ways to serve Him by sharing God’s love in Christ as He prompts. His good gifts of food, health, books, nature, and music are benefits He adds and I receive with joy.” 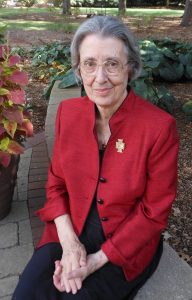 In sharing memories of her ministry, Shirley writes, “One of my favorite projects during my tenure as Field Secretary for the LDA from 1953 -56 was writing the neat little pamphlet with questions and answers about deaconess work to be used in PR and recruitment.  I believe it was called ‘A Deaconess Quiz.’  Another distinct joy was visiting deaconesses in action around the country as I traveled here and there [as LDA Field Secretary] to talk about “Deaconess Daughters, Dollars and Prayer.”   An evening of prayer on an Indian reservation in Arizona left a lasting impression with me as did the joyful embrace from God’s special needs children at what was then Bethesda Home in Watertown, WI.  To see the breadth and depth of service rendered by so many deaconesses was a great privilege and gave me plenty to share with women’s groups, young women, and pastors whom we urged to support the diaconate.  Of course, the service of Deaconesses Gertrude Simon and Martha Boss was legendary at that time.   I might add that the service of Deaconess Carol Halter, who now follows in their footsteps in Hong Kong/China, is likely going to be legendary.  As missionary Maynard Dorow’s deaconess wife, I was able to taste the challenges and joys of cross-cultural sharing of Christ’s love in South Korea.  We worked with Deacon Gottfred Rekkebo and his wife, a deaconess, both from Norway but serving in Korea, to facilitate the beginning of the Diakonia arm of the Lutheran Church in Korea.   Beautiful stories of service by both women and men of the LCK continue to take place.”