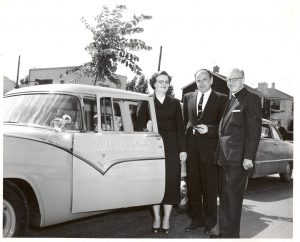 Hertha Fischer was born in 1930 in New York City. At age seven, she tagged along as an older sibling attended confirmation class at St. Paul’s Lutheran Church of Tremont in the Bronx. Her family attended church only for the occasions of baptism, confirmation, marriage, and funerals. After this visit, Hertha decided to go back to St. Paul’s even without her sibling. A woman named Louise Bunzel took Hertha under her wings and served as her “church mother”. She became active with the St. Paul’s youth group and by age 15 she was teaching Sunday School and at age 16 she directed the Christmas program.

Hertha graduated with a BA from Hunter College in 1951 with a major in chemistry and minor in physics and mathematics and worked as a “Girl Chemist”, as she was referred to in an article. Hertha came to Valparaiso University to study theology to become a Lutheran Deaconess. She lived in the Deaconess Chapter House on Chicago Street. During her time at Valpo, Hertha worked as an assistant instructor in the chemistry department to help pay for her educational program.

Hertha was consecrated June 12, 1955, at St. Paul’s Evangelical Lutheran Church of Tremont, New York City. Hertha served at Capitol Drive Lutheran Church in Milwaukee, and then served at St. Mark’s, Brooklyn, NY… “The work at St. Mark’s is many things, but above all, it is to bring the Gospel to all racial and ethnic groups. Integration here has made a number of steps forward. This year our Sunday school will sing carols in three languages – English, German, and Spanish.”

After earning an MSW from Columbia University in 1964, she worked for eight years with Lutheran Child Welfare Association of New York City. She was concerned that the system paid more attention to the “cream of the crop” kids and not the “hard to place” kids. She helped Lutheran Child Welfare be more responsive to current problems and needs. Recognizing her leadership and talent she was later employed by the Federation of Protestant Welfare Agencies of New York City, where she helped open doors and services for the ‘hard to place.’ Of this ministry, she said, “The position I now hold gives me unusual opportunities to influence policy (public and voluntary agencies) for the benefit of the poor, the needy, etc. My prayer is that God daily gives me the vision to see clearly and think creatively.”

In the late 50s/early 60’s Hertha started “helping” the LDA think in new ways. She wrote a paper on why it was important to have a deaconess on staff back in the days when there were only men, 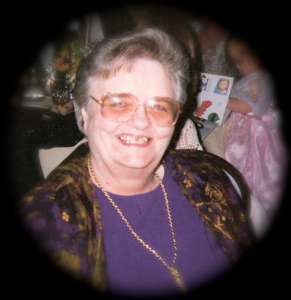 men on our board, men on our staff – and once women were on staff – she was there to support them. Hertha was also an integral part of much of the LDA’s long-range planning process over many years. She was an instrumental voice in discussions leading to the decision by the LDC to join DIAKONIA World Federation, the global association of deaconesses and deacons from many faith communities. When the LDA began forming men for lives of service as deacons, Hertha was one of the first deaconesses to mentor a deacon student. She also served as LDC President.

In her later years, Hertha was very active at her congregation, Prince of Peace Lutheran Church in Old Tappan, New Jersey. During her retirement, Hertha served a variety of boards and committees, including her church council. She saw the church through two vacancies. Of her time at Prince of Peace, Hertha said, “They have recognized and used my gifts. I am their deaconess.”

When asked about community, Hertha said, “The gift of the experience of community – especially in the diaconate – is used in helping to build communities wherever I am. I believe the support and encouragement each of us gains in this way expands ministry constantly.”

In 2003 Hertha was awarded the Wartburg Seminary Living Loehe Award. The award is given to those “who demonstrate in their own lives the passionate witness in word and deed to God’s reign in the world through Jesus Christ, in the legacy of Wilhelm Loehe who founded the seminary in 1854.”

In a letter found on Hertha’s computer after her death, Hertha writes “In community, I was able to try out unusual ministries, challenge others to greater heights and participate in opportunities for growth and blessing. All of my sisters in the community have been precious and special to me.” She reminds us “Cherish the community and embrace its history. Do not use that history, however, to maintain the status quo; use it rather to rejoice in what we have and to dream of where we might go. The Spirit will not fail to have us accomplish God’s purpose.”

Hertha died on March 4, 2014. Her voice and spirit continue to echo throughout the Lutheran Deaconess Conference.

DeacPost “What Does Love Look Like?” Deacon Ben Ema

I came that they may have life, and have it...

DeacPost “What Does Love Look Like?” Deacon Ben Ema

See what love the Father has given us, that we...