The towel. An ordinary object that, like so many others, becomes so much more in the hands of Jesus. 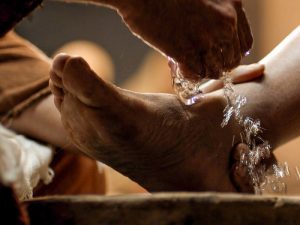 Tied around his waist, it is a preparation. A foreknowing of the lesson and the events to come. Jesus takes off his outer robe, all eyes in the room on him in anticipation. Knowing that their teacher is a deep and complex man, moving across the room with the same sense of urgency that his words have carried over the last few days. He pours water into a basin and kneels down before the person nearest to him.

Towel in his hand, it is a declaration. About the type of man, of ministry, he is about. Taking on the humble act of a servant, yes. But even more so a message of mutuality. The teacher, the leader, the Son of God revealing that all are equal in this new kingdom concept. That when serving another, the first thing you serve is dignity. A leader on his knees, his eyes locked on the person he kneels before, willing them to understand.

Drying his hands on the towel, he approaches Peter. His dear and impetuous friend. Knowing that Peter will speak the first thing that pops into his head. He loves that about Peter. Just as the towel is flexible to the foot it dries, Jesus meets his followers where they are. Not demanding more, but adapting and forming, fulfilling its purpose as it bends and shapes

The towel is pushed aside as Peter jumps up and declares, “You will never wash my feet!” A small push of air as Jesus retrieves the towel and once again reaches to pour the water. Gently continuing the lesson of mutual service, of giving of oneself to serve another of God’s beloved children and being open to the refreshing warm stream of the water when another serves you. Impetuous Peter takes the lesson and runs with it, “Lord, wash all of me then! My hands and my head too!”

The towel soaks up the water and grime of the people gathered in the room. Bending, flexible, soft, dutiful in its purpose. The water is soaked up as the lesson sinks in. A call to a new way of life. An example of this now and not-yet kingdom that Jesus describes.

When the towel’s work is done Jesus sets it aside, a quiet witness to the rest of the lesson. “Do you know what I have done to you?” he asks, taking his place at the table. “You call me, rightfully so, Teacher and Lord. And if I, as your Teacher and Lord have washed your feet, you also ought to wash one another’s feet. I’m setting an example for you to follow.”

This ordinary object, in the hands of Jesus, becomes our pattern for living. For we are all God’s beloved children, called to mutual respect and service. Wiping away the hierarchy and judgment. Stripping off the titles and trappings of the earthly economy of worth. Taking our turn with basin and towel to serve one another. Knowing that to love another means also to accept love, in whatever form it comes.

DeacPost “Where are the Fish?”

Therefore, confess your sins to one another and...

DeacPost “Where are the Fish?”

Rejoice in the Lord always; again I will say,...