When he came to Nazareth, where he had been brought up, he went to the synagogue on the sabbath day, as was his custom. He stood up to read, and the scroll of the prophet Isaiah was given 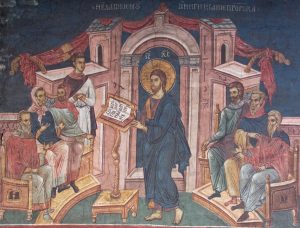 to him. He unrolled the scroll and found the place where it was written:
“The Spirit of the Lord is upon me,
because he has anointed me
to bring good news to the poor.
He has sent me to proclaim release to the captives
and recovery of sight to the blind,
to let the oppressed go free,
to proclaim the year of the Lord’s favor.”  Luke 4:16-19

Webster’s dictionary says that epiphanies are moments of sudden understanding, times when the light goes on with a flash. Maybe it was that sort of epiphany day when Jesus, the hometown boy, spoke at the Nazareth synagogue.

“God has plans,” Jesus told the gathered crowd. “Good news has to get to the poor, captives have to be released, the blind need to see, and the oppressed must be freed. I am the one who has been appointed to do these things – today.”

This might have been a bit too fast for Jesus’ listeners. Or maybe they hadn’t imagined that there were blind, poor, oppressed captives in Nazareth, or that they were them. But Jesus turned the light on. “God is here now and intent on giving away vision and freedom,” Jesus told them.

Maybe it was an epiphany day for some of Jesus’ hearers, a day of being almost blinded by the light and then of seeing clearly that God really is bent on reaching down and lifting up the needy from the ash heap to make them sit with princes.

Prayer:  Lord Jesus, free us from our chains and give us the courage to free others, too. Amen.

If you could see the journey whole You might...

When he came to Nazareth, where he had been...