The following article was written and compiled by Deaconess Diane Greve

The social norms of our society often inform our own worldview.  The LDA has known the impact of social changes over these 100 years as the role of women in leadership evolved. The following overview will touch on how the LDA leadership in the form of the Board and staff has been structured, how it has evolved and names some of the people who have served in these roles. 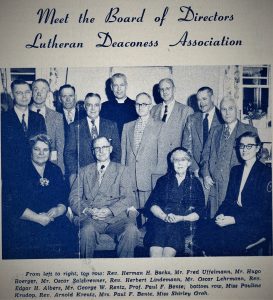 institutions, it was understood that the male clergy were the shepherds of the overall well-being of the deaconesses, their education, their placements and the rules governing their ministries.  In the early years, the LDA Board of Directors, consisting of pastors and laymen of the Synodical Conference who lived in the Ft. Wayne area had a central role in the operations of the organization. They became advocates for the ministry of deaconess in the Synodical Conference.

As the Board met quarterly and the executive committee monthly, living around Ft Wayne allowed savings on travel expenses. The Superintendent also lived in Ft Wayne and for a time lived in the motherhouse.  Since there were no term limits, the same people frequently served on the Board for many years, often until their death. The Plenary Board was elected at the annual meetings held in Ft Wayne.

During the first 50 years, Pastors Phillip Wambsganss (1919-1933), Walter Klausing (1933-1955), and Edgar Albers (1955-69) served as Board presidents. Pastor Wambsganss most likely had the clearest vision for a women’s diaconate since his mother had been a deaconess who had studied with Theodore Fliedner in Kaiserswerth and moved with three other deaconesses to Pittsburgh in 1849.  As Chair of the Board, he was granted a significant leadership role in forming this new deaconess training program.  Pastor Klausing was the Board President when the LDA moved from Ft. Wayne to Valparaiso and began the visioning for Deaconess Hall.  Pastor Albers provided leadership during the building of and transition into Deaconess Hall. The Board had a clear and significant leadership role in the organization and the President of the Board was involved in management as well as governance. These three men treasured the ministry of the deaconesses, had a vision for the role of women in the church and were active partners in leadership with those serving as superintendent/executive directors.

In the fall of 1944, the Secretary of the Ft. Wayne Deaconess Auxiliary, Mrs. William Doenges, wrote requesting to have a woman appointed to the LDA Board. The men were open to this and at the annual meeting of November 2, 1945, Miss Marie Zucker was elected to the Board. At that time, a resolution was passed that two women serve on the Board—the President of the Ft. Wayne Deaconess Auxiliary would automatically serve and another would be duly elected at the LDA’s annual meeting.  Several women served on the Board over the following years including Mrs. Arthur Beck, Mrs. Hedwig Kucher and Miss Pauline Krudop.  Deaconess Jan Orluske, who was serving as a parish deaconess at Emmanuel in Ft Wayne, was elected to take an open position in 1966, becoming the first deaconess to serve on the Board.

The LDA Staff 1919-1971
Pastor Herzberger, the initial proponent of the education of women as deaconesses, was the first Superintendent.  He and Board president, Pastor Wambsganss, collaborated in developing their vision for a deaconess training program.  Herzberger was also a chaplain at institutions of mercy in the Fort Wayne area and, once the deaconess program was growing, he stepped back.  The following clergymen served as superintendent (executive director) in succeeding years: Bruno Poch 1923–32; Herman B. Kohlmeier 1932–41; Arnold F. Krentz 1941–61; Walter C. Gerken 1961–67; and, Arne P. Kristo 1968–71.  Each made his own unique contributions to furthering the ministry of deaconesses.  They are dearly remembered by many of the women who came through the program in those years.  They worked closely with the Board to care for the deaconesses, to provide for their education and placement, and to stay attuned to the shifting needs of the church.   The title of Superintendent changed to Executive Director in 1957.

By the late 1960s, many deaconesses began to envision a more prominent female voice in the deaconess community.  The social changes of the time led to new possibilities and visions for the leadership of women. In 1970 the LCA and ALC ordained the first female pastors.  It was the kairos moment for women and particularly deaconesses to step into the role of Executive Director and other leadership positions.

There were deaconesses in professional leadership, however, as early as Deaconess Ina Kempf, who was employed as the Superintendent at the LDA’s Beaver Dam training school following her consecration in 1922. Other women served over the years in various roles. The position of Field Secretary began in 1953 with the employment of Deaconess Shirley Groh.  She and Pastor Krentz, both located at the office in Ft. Wayne formed a professional leadership team. In 1956, Mary Bohrer accepted the call to this role followed by Esther Kusch, Marilyn Brammeier and Lucy Wiese.   When the LDA first moved the education program to Valparaiso, women were employed as house directors:  Mrs. Sylvia Troutman at the Chapter House on Chicago Avenue; when Deaconess Hall was opened in 1958, Deaconess Clara Strehlow took the role of house director and counselor to the students followed by Deaconess Edie Hovey (1963-66), Mrs. Ruth Gehrke (1967-68), Mrs. Ethelyne Kristo (1968-69) and Deaconess Jackie Haug  (1969-71).

LDA staff 1971 until today
In 1971, Dr. Lucille Wassman, a laywoman on the LDA Board, was selected to be the next Executive Director. This was a radical change for the deaconesses and for the LDA after having had only clergymen in that role from the inception of the program.   Other changes were taking place concurrently as the deaconesses were now serving beyond the LCMS, consecration no longer was dependent on a call, and women could be married during their student years.  In 1974, Deaconess Louise Williams was called to the position of Director of Deaconess Services. Upon Dr. Wassman’s resignation in 1975, Louise moved into the role of Executive Director, which she held until 2008. In 2008, Deaconess Lisa Polito was called to serve as Executive Director.

Other deaconesses served the LDA beginning in 1971.  Deaconess Vanette Kashmer provided leadership in education and student life until 1978.  Deaconess Evelyn Middelstadt served as Director of Student Services (1978-82).  At Louise Williams’ initiative, a convocation of deaconess consisting of representatives from the area conferences gathered in 1975 to consider future directions of the LDA.  One vision was to have a leadership team of three deaconesses to more fully utilize the wisdom of deaconesses.   The first team of three deaconesses was Louise Williams, Mary Gunderson (1983-89) and Diane Greve (1984-92).   Since 1971, the primary professional staff of the LDA have been laywomen and deaconesses.   Today, the leadership team consists of Deaconesses Lisa Polito, Executive Director, Valerie Webdell and Debra Lennox as Co-Directors of Education and Formation, and laywoman Andi Jones, as Director of Development and Recruitment.

The LDA Board 1969 until today
After Pastor Albers stepped down as LDA President, the turnover in the role of Board President began with Pastors Arthur Ziegler and Herbert Steinbauer in swift succession.  In 1973 Norma Cook Everest became the first deaconess elected as the LDA Board President.  This was another transition for the LDA as the staff and Board suddenly turned from consisting of mostly men to a more heavily female make-up.  Since then, many of the LDA presidents have been deaconesses including one of Pastor Albers’ daughters, Elaine Albers Plackner.  With changes in the constitution and bylaws, a new Board arrangement was created with 12 elected members: 3 laymen, 3 laywomen, 3 deaconesses, 3 pastors, each of whom could serve up to two 3-year terms. The LDA Board elected the Executive Committee.  The Board met less frequently than before.  Committees took a larger role.  And, significantly, efforts were made for the Board members to attend the Lutheran Deaconess Conference annual meetings to build mutual trust and understanding.

More changes and decisions were made by the LDA Board over the past 50 years including the sale of Deaconess Hall and the opening of the LDA’s diaconal formation program to male students. A new name was selected in 2017 – The Lutheran Diaconal Association.  Today, the LDA Board also includes representatives from the Lutheran Deaconess Conference, the Community of Lutheran Deacons, Valparaiso University, and the ELCA and the LCMS.

Conclusions
Over these 100 years, the mission of the LDA remains “Preparing and supporting the whole people of God in Christ’s call to serve.”  Public relations and development remain critical to the foundation of this mission.  The creation of the LDA diaconate, expansion to four training sites, contraction to one, relocation to Valparaiso, the building of Deaconess Hall, the closing of Deaconess Hall, and shifting from male leadership to female leadership has kept the LDA dynamic and flexible.  Frequently “under the radar” of the larger church and community, the LDA Board and staff have sought to follow the movement of the Holy Spirit in many and varied ways.

The Board and staff have in some ways changed places.  In the infancy of the organization, the Board had an instrumental role in shaping and directing the program and the staff seemed to serve at the direction of the Board.  Then came the transition during the ’60s and ‘70s when the Board members began to have term limits, they lived throughout the United States and Canada, the Presidents served for a few years at most, and the staff had more longevity and a stronger voice.  Through these 100 years, the Board and staff have always served the same vision:  “Following Christ, people of God serve those across the street and around the world.”  We pray for the Holy Spirit to lead us all into the next 50 years and beyond!