This story was presented at the LDA’s Centennial Banquet on Friday, November 8, 2019, written by Marilyn and read by Deaconess Eva Schindhelm.

While Marilyn Kelso has lived most of her life in Wisconsin, Marilyn Schulz grew up in North Tonawanda, New York. Her mother had friends who were missionaries in China, and to Marilyn, this missionary work sounded like something she wanted to do.

Upon graduation from high school, Marilyn headed for Valparaiso University as a deaconess student. Her freshman year she lived in the Chapter House on Chicago Street, junior and senior years she lived in the Annex. Marilyn remembers having to do her own cooking and cleaning, Monday night Pi Delta Chi meetings, and occasionally, after lights out, sneaking out with some of the other women to make a DQ run!

Because there were more deaconess students than there was room to house them in the Chapter House and the Annex, many students were housed with faculty members. During her sophomore year, Marilyn lived with the Rev. Dr. Luther Koepke and his family….for those of you unfamiliar with Dr. Koepke, during his tenure here at VU, he not only taught theology courses, but also served as Dean of Men, Dean of Students, and Assistant to the President in the Office of Church Relations.

There were no internships during Marilyn’s years of training, but there was summer fieldwork. Between her sophomore and junior years, Marilyn served as a housemother at a “receiving home” in West Roxbury, Massachusetts, where she recalls being on duty 23 hours per day. Between her junior and senior years, Marilyn served as a housemother at the Children’s Home in Addison, Illinois, where many of our sisters also served through the years.

Following graduation, Marilyn was consecrated as deaconess on June 13, 1954, and in August began serving her call at the Bethesda Lutheran Home in Watertown, Wisconsin. Responsibilities included teaching school half days, taking residents to Chapel on Sundays, and serving as a night nurse. (As a side note, Marilyn said that if she hadn’t become a deaconess, she likely would have been a nurse).

It was at Bethesda that Marilyn met Harry Kelso, who was one of the teachers there. She had dated some of the other young men, but it seemed to her that she and Harry had the most in common. They became engaged in November of 1954, were married in March of 1955, and welcomed their first child in January of 1956. This was an era when women serving as deaconesses got married would get a letter from the LDA thanking them for their service and wishing them a happy life, but Marilyn never got that letter from the LDA and continued to work…until she got that letter from Bethesda, when her first pregnancy became too obvious to hide!

With the cut in household income and a growing family, Harry left Bethesda and took a job as a teacher at the Southern Colony for the Developmentally Disabled in Union Grove, Wisconsin. Marilyn wanted to work again at the same place as Harry, as they had worked at Bethesda, but the Southern Colony, a state institution, had no job openings for a deaconess. So, in 1960, Marilyn enrolled in the Social Work program at the University of Wisconsin-Milwaukee, and for two years made the 35 mile trip from her home in Kansasville up to Milwaukee to take the required classes, eventually earning her degree. (Again, another aside, most women back in that time did not do this!). Now a medical social worker, Marilyn easily got a job at the Southern Center and was in a unique position to be an advocate in medical matters for the residents and their families.

In the late 1970’s Marilyn again became active in the deaconess community, attending and hosting area meetings, and attending Annual Meetings and DOTAC and DIAKONIA assemblies. Harry attended Annual Meetings with Marilyn and was among the group of husbands known as the “Deaconess Auxiliary,” their yellow t-shirts proudly naming their group on the front, and on the back was something 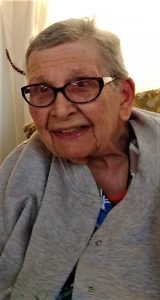 Marilyn worked at Southern Colony from June 1962 to July 1990. After she and Harry had both retired, they bought a second home in Florida and became snowbirds. Harry died in 2000, but Marilyn continued to be active in the deaconess community and in the LWML at her church. Marilyn also continues to give loving support to her family, which now numbers 4 children, 11 grandchildren, about 20 great-grandchildren (she couldn’t give me an exact number), and 2 great-great-grandchildren.

This year Marilyn celebrated the 65th anniversary of her consecration, and on a personal note, I’d like to thank her for being a dear friend and a genuine example of faith and service in Christ.