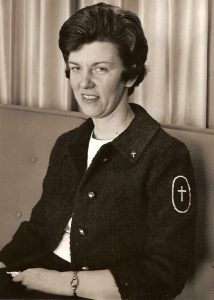 Deaconess Jean Hoover was born in October 1927 in Ontario, Canada. She attended various schools in Ontario and then enrolled in the deaconess training program at Valparaiso University in 1951. She was the first LDA deaconess from Canada.

Jean served as a consultant in Christian education for the Lutheran Mission Association in St. Louis, wrote and edited curriculum materials for the Board of Parish Education of the LCMS, and was involved with a variety of projects dealing with ministry to and by women.

In a 1977 letter, Jean referred to herself as a “freelance deaconess, which means I have no official call from a congregation or other church institution, but I carry out short-term kinds of ministries as opportunities and needs arise.” Throughout her life and ministry, Jean focused on the needs of women, even conducting a research study for the St. Louis Theological Consortium on the needs of women in the Church.

She was also an outspoken advocate for the need for a deaconess as the Executive Director of the LDA. In a 1966 letter to Pr. Edgar Albers, Jean writes, “I have become quite disturbed over the lack of pastoral concern for those of us in the diaconate. Other deaconess groups have their own pastors plus a directing sister of some kind.” “I know there is a great longing for some one person in a position of authority to whom one can turn in times of trouble and also with whom one can share great joys…I believe a deaconess would be most suitable for this position because of the fact that she is a woman and could understand most fully the difficulties facing a woman worker in the church….She would assume pastoral responsibilities toward her sisters in the field and would take care of anything related to the girls in the field.” 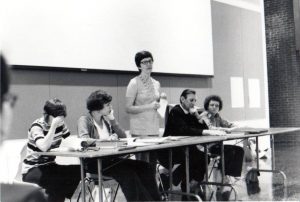 For four years, Jean co-edited and published a bi-monthly newsletter titled, “New Deborah”, which encouraged women to recognize and use their gifts. She fully embraced the women’s movement of the 1960s and urged her sisters to do the same, along with exploring feminist ideas in relation to their Christian faith.

In asking some deaconesses who knew Jean to share a bit about her, Deaconess Jan Orluske writes, “I knew her as a gracious, thoughtful leader who was much admired. What came to mind were the words from Galatians 5, ‘The fruit of the spirit is love, joy, peace, patience, kindness, faithfulness, goodness, gentleness, self-control.” That was Jean. She was a joy to know.” Deaconess Edie Hovey, who served as Vice-President of the LDC while Jean was President, shares that she had a great deal of respect for Jean and her abilities.

Jan also shared, “After she retired, she shocked us by saying she thought she would like to get married! As a lifelong single person, we didn’t know what to make of it. But lo and behold, the next time we saw her she was married. She said she had tried the single life and now she wanted to be married. It was as simple as that.”

Jean married Robert Schneider in 1969 and died in 1979 after a battle with lung cancer. She was 51 years old.