Evelyn Middelstadt was born in 1928 in Anoka, Minnesota and grew up on a dairy farm near Elk River.  She learned about serving others from the beginning of her life, as her parents not only raised and cared for Evelyn and her brother, but also two cousins who were left motherless at an early age.

Evelyn attended Lutheran schools and enrolled at Valparaiso University in the deaconess training program.  She wrote on her application, “I want to work for Christ’s Kingdom on Earth.” She graduated in 1952 and was consecrated as a Lutheran Deaconess on September 28, 1952.  Her fieldwork was done at Camp Arcadia in Michigan and at the Lutheran Association for Works of Mercy children’s home in Massachusetts, where her supervisor wrote, “her work could best be summed up in these words, the children loved her”.  Through this experience, she felt called to serve children who were looking to be placed for adoption.

In 1954, Evelyn obtained a Master’s Degree in Social Work from the University of Minnesota and went to work for the Lutheran Children’s Friend Society in Minneapolis.  In 1960, she accepted a position as Supervisor of Social Work for Lutheran Social Services (LSS) of Kansas and Oklahoma.  Throughout her time at LSS, Evelyn was particularly active in the area of adoption and placement of children with special needs. 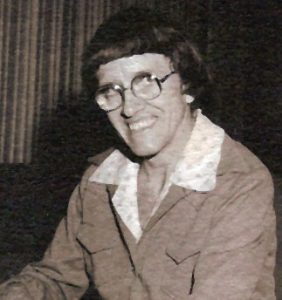 Association, a position she held until 1983.  During that time she helped the Lutheran Deaconess Association envision a formation and education process that allowed second and third career women to become deaconesses without leaving home.  Evelyn also helped design and pilot “The ‘M’ is for me—Gatherings for Mothers.”  These weekend retreats helped mothers of young children see motherhood as a Christian, diaconal vocation.  Evelyn also served several terms as president of the Lutheran Deaconess Conference.

While working with LSS, Evelyn developed a friendship with Moses Thompson, with whom she did advocacy work and conducted workshops on the topics of racism and healing divisions among people.  She and Mr. Thompson established Minority Contractors & Consultants, a company that provided employment opportunities and training for ethnic minorities.  Although she retired several times, she continued to work with self-help and support groups and in advocacy against racism and for minority rights.

After retiring and returning to Kansas in 1991, she created an organization, Self-Help Network of Kansas, which developed and promoted self-help/mutual support groups, particularly those serving caregivers, parents of special needs children, and those living with mental illness.  She created and published a directory of these groups, along with operating a telephone referral service, all from the kitchen in her own home. 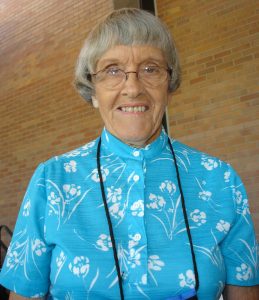 In 2007, just 9 days after celebrating her 55th consecration anniversary at the LDC’s annual meeting, Evelyn was killed in her office at Minority Contractors & Consultants by a client of the organization, who Evelyn had been helping.  Her death shocked not only the deaconess community, but also her local community in Wichita.  In an address at Evelyn’s memorial service, Deaconess Louise Williams, former executive director of the LDA shared, “Evelyn’s last words to us as we honored her went something like this:  she said she wanted to say something now because she didn’t know if she would make it to her 60th.  She then talked about her life’s two passions.  She reminded us of the importance of self-help—of people helping one another. Then she urged us all to work against racism and all forms of prejudice.  How can we not be challenged by her words and inspired by her life!  We deaconesses intend to carry on her legacy—and we hope that you, too, will join us in “working for Christ’s kingdom on earth” so that the love of God Evelyn knows so well may be more evident in this world which God so much loves.”