Elaine Albers Plackner was born in 1941 in Columbus, Georgia, daughter of Lutheran Pastor Edgar and Gertrude Albers.  In 1959, at the urging of her father, she enrolled at Valparaiso University in the deaconess program.  She graduated and was consecrated on June 21, 1964, at Calvary Lutheran Church in Indianapolis. LDA Executive Director Walter Gerken preached, Deaconess-in-Residence Edie Hovey presented the deaconess cross, and Deaconess Lucy Wiese presented the consecration certificate.  Her father, Pastor Ed Albers was then serving as LDA Board President and also participated in the service. 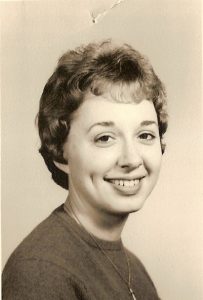 Elaine served two internships, first in the inner city of Detroit, then at Church of the Good Shepherd, Plainview, New York.  Her first call was to Concordia Lutheran Church in St. Paul, MN as Parish Deaconess where she worked with children and youth.  In 1973, Elaine served part-time as Pastoral Counselor at the Medical College of Ohio Hospital-Toledo.  While there, she took CPE courses.  In 1976, Elaine began serving as a school social work assistant with the Intermediate School District and did group therapy work at the Chip Counseling Center.  In 1983, she became Executive Director of Chip, a non-profit center offering individual and family counseling, specializing in substance abuse counseling.

Elaine said that she learned about deaconess ministry from her father, who was President of the LDA Board for many years.  “I would like to say that I had a very clear purpose from the very beginning, however, I really felt the deaconess program offered much leeway in the possibilities of service so that I could take my time to decide which direction to choose.” “My sense of purpose became very strong during my two internship experiences and I became convinced that deaconess ministry was for me.”

In 1979, Elaine met and married Pastor Jim Plackner, with whom she had two children.  1n 1997, Elaine was diagnosed with cancer which claimed her life in a matter of seven weeks. Elaine died on June 25, 1997.  In a letter to the LDA after Elaine’s death, Jim writes, “We had twenty-eight packed years.  We had more in twenty-eight years than most people have in twice that many years.  We did not have to alter our behavior because of cancer.  Jesus was always first in our lives; we were second.”

Elaine was an avid promoter of deaconess ministry and encouraged others to consider that call, mentoring students and young deaconesses.  Deaconess Karen Bakewicz was in the youth group at Elaine’s first parish in St. Paul.  Elaine followed in her father’s footsteps with six years of service on the LDA Board as Vice-President and then President.  At Elaine’s memorial service, Deaconess E. Louise Williams shared, “She served with gentle strength and quiet wisdom which helped others develop their leadership abilities.  Elaine developed and printed each year a prayer calendar with the birthdays of all 400 LDA deaconesses.  She encouraged the use of technology to build community.  Before her death, she was on the planning team for that year’s LDC Annual Meeting, 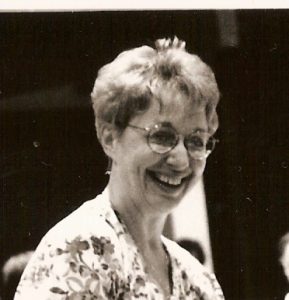 as well as writing a book for pastors’ wives.”

In an article written by Elaine in 1987, she shared, “Piece by piece, I am a deaconess.  As a person who likes some semblance of organization, pattern, and control, I am at times surprised, unnerved, calmed and comforted by God’s gifts and directions for my life.  Where I would have planned a beautifully crafted quilt of lovely patterns in fine fabrics, God is providing me patches which are seemingly incongruent with each other.  My ministry has not settled into one particular area of service.  Throughout these experiences, the Spirit’s message to me gradually became more clear – quit trying so hard to plan, control, direct – learn to accept, enjoy, and move forward. My personal journey has taken me through various phases of family life.  I have, on occasion, argued a point with God, needing to make peace with his design for my life.  I have felt increasingly able to accept and move with the experiences of my life, finding in each ‘patch’ a new awareness of God’s gifts to and in and through me.  Piece by piece, patch by patch, and ‘peace’ by ‘peace’ I am a deaconess in process.”