(The following was written by Deaconess Edie Hovey)

Edie was born in Cleveland, Ohio and raised in its suburbs. She attended Lutheran grade school and graduated from Westlake High School in 1957. She had been very active in the Walther League program of her church, having served in various leadership positions, and also had been active in the wider Ohio area activities, as well as having attended several international conventions. She went to Valparaiso University in the fall of 1957 and lived in Guild Hall during her freshman year.   She could watch Deaconess Hall being built from her room. She originally wanted to go into Social Work but began to feel the call to be in church ministry as a deaconess. She began deaconess training as a sophomore and moved into deaconess hall.  Since she was interested in doing youth work as part of her ministry, she was given permission to participate in the Youth Leadership Training Program at Valpo while a deaconess student. Edie was a Walther League caravaner in the summer of 1959. She did a summer internship in 1960 in the St. Louis area, working with children in a Lutheran orphanage. 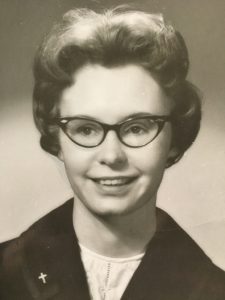 She graduated from Valpo and was consecrated in June of 1961.  Her first call was to St. John Lutheran Church in Meriden, CN, where she was the Director of Youth and Education from 1961-63. She worked with the youth of the church to plan their programs and visited them in their homes. She also directed the church’s Christian education program, and taught confirmation classes and worked with the Sunday School.

In 1963, she was called to work on the staff of the Lutheran Deaconess Association in Valpo, as the Assistant to the Director of Training/Deaconess in Residence. She worked with Arne Kristo, and the deaconess students in their fieldwork experiences, Pi Delta Chi, residence concerns, etc.  She was known as Sister Edie.

From 1966-69, she worked again in a parish as director of Youth and Education at Resurrection Lutheran Church in Santa Clara, CA.  She planned programs, retreats, and was on the California/Nevada District Youth Committee. She also developed and taught a Weekday School of Religion for grade school-age children, which also included confirmation classes.

In 1969 she moved to Los Angeles where she was the Director of the Nursery School/Day Care Center for Mount Calvary Lutheran Church (ALC). She worked with the staff to plan curriculum activities and worked with the students and their parents.  This was in a primarily black area of Los Angeles. 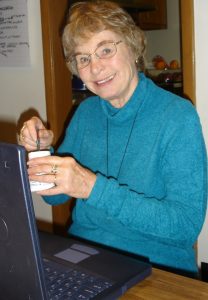 es) to help them be employed or re-employed. She counseled them to help them decide on an appropriate vocational goal and provided the services they needed to reach that goal (schooling, equipment, transportation assistance, job seeing skills, etc.). She was also active in the union for health and social services professionals while working for the state. She served as an office steward, was on the statewide board for many years as a regional representative, secretary, vice president, and the Rehabilitation Occupational Committee chairperson. She was also on the statewide contract negotiations team several times, representing the rehabilitation counselors.

Edie continues to be an active retiree, serving as chair of the Accessibility Ministry in her church, participates in the S. CA Deaconess gatherings, has ushered at the Pasadena Playhouse (State Theater of California) for almost 25 years, taught the AARP Smart Driver Classes for 9 years, and is very active in the retirement community where she lives.

Edie served on various LDA and LDC committees and served on the LDC Board three different times – 2 times as Vice President, and one time as Secretary. She is grateful that the LDA has come to the decision to allow women and now men, to continue to be part of the Diaconal community even if they do not serve in a specific church-related position.  She considers ministry to be very broad to include many different kinds of service in many different settings.