The following is excerpted from Deacon David’s remarks given at the LDA’s Centennial Banquet on November 8, 2019.

When I arrived on Valparaiso University’s campus eight years ago, I had recently [only one year prior to my arrival at Valpo] encountered the life-giving Jesus in a small Lutheran church on the 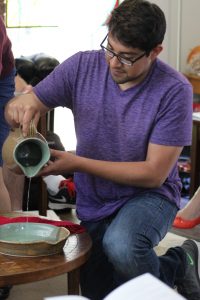 edge of a cornfield. Ever since (because of all the questions I had for him), my pastor at the time had kept pestering me with strange words like ‘discernment’ and scary phrases like ‘possible future in ministry’. So by the time I began my university studies, I had decided to stay away from pastors.

But, I still had lots of questions. So, at the suggestion of various people, I decided to stop by the LDA’s Center and continue to ask about Jesus — safely among a group of women who only trained other women for ministry. Jesus, good food, and no commitment on my end, nothing could be better.

Until I began to hear rumblings of a conversation that had been going on for a long time in the community. In my second year at Valpo, the LDA began to train men as deacons. All of a sudden I had various other people using pesky words like ‘discernment’ and annoying phrases like ‘possible future in ministry’ when all I wanted (I thought) was to eat delicious scones made by Deaconess Jane Schreiner and talk theology around a table of good soup and even better friends.

And yet … the Holy Spirit kept nudging me and eventually I began the LDA’s formation process in the Spring of 2013. Five years later on the Eve of St. John the Baptist’s feast day 2018, I was consecrated as a deacon of the Lutheran Diaconal Association. Thanks be to God. Seriously. Because I thought I wouldn’t finish. And it’s not because I don’t love this organization and its work. but it’s because the process of discernment is so difficult and the reality of life in ministry can be so daunting.

As you might know, the LDA’s formation process requires those being trained to complete a one-year internship. In my case, my hoped-for plans of being in London right after graduation from Valpo fell through. I moped around defeated and angry for a while until I sat down with Deaconesses Valerie Webdell and Kristin Lewis to try to figure out what I might do. I remember in passing hinting that, I could perhaps be interested in rural ministry.

A few days later, Deaconess Kristin called me and asked me a question that would shape my life in ways I could have never imagined. She asked me, “How rural is too rural?” Not fully understanding what I was saying my reply was something to the effect of, “I’ll try anything.” This set things into motion so quickly that before I could understand what was happening, I found myself in a town of fewer than 300 people, one gas station, a sometimes-open grocery store, and being one of probably three people in the entire town whose last name did not end in ‘sen.’ Now, I am being a bit overdramatic but I definitely did call Deaconess Kristin saying, “What the heck?! Where did you send me?! Can I quit?!”

But I am glad to have stayed there, near the Banks of Plum Creek, as the #MexicanOnThePrarie and to have grown deep roots among the good people of rural U.S.A. I am thankful to have been supported enough to end up being a consecrated member of this wonderful diaconate.

The LDA’s formation process taught me to discern the voice of the Holy Spirit in my life even when it proves to be uncomfortable and not at all what I had planned, which is pretty often. It made me realize that the reality of Christian ministry is to be in community among those who are different from me in every respect; to exist affirmed only in my identity in Christ and his call to serve all in Jesus’ name. Whether called to bustling cities or sprawling prairies. To people who are similar, and to those who couldn’t be any more different. I am called to follow Jesus and to serve all. This is what the LDA has taught me, and it is how I live out my call in daily life.

Through being a diaconate comprised of Lutherans of every flavor, we are constantly reminded that who we are is what God’s promises to us in our baptism. By “going from and returning to the holy font”, to paraphrase the Diaconal Litany. we have freedom from fear to learn from each other … this grace of being different together, and it is a gift today, has been for the last one hundred years, and promises to continue being for the next one hundred to come.

Because the Holy Spirit will continue to nudge people into discerning future lives in ministry, and the LDA will continue to stand ready to nurture and send women and men focused solely on our

identity in Jesus. God will carry on being faithful to believers by calling, enlightening, and consecrating women and men to wash the feet of a weary world in the name of Jesus. This will happen even as some wring their hands about the future of the Church. And the LDA, continuing to be flexible and adaptable will proceed in ways that are creative and needed for the sake of the good news of Christ. I’m not exactly sure what the future will bring as we face the gargantuan shifts in society. But I do know that the LDA listens to the Holy Spirit in ways that aid discernment into lives in ministry. This is why I am excited for the coming one hundred years for our diaconate — because, if we continue as we have, Jesus will be our steadying rock as we live into uncertain times of faithlessness, polarization, turmoil, and gloomy forecasts.

We won’t live perfectly, but we will do it with a servant’s heart as we follow Jesus imperfectly. We will work in the likeness of our sister deaconesses and honorary brother deacons who have joined the Church triumphant and who are cheering us on to continue doing the good work without growing weary in Christ’s name. Thanks be to God for the LDA.

While they were talking about this, Jesus himself...

Your word is a lamp to my feet And a light to my...

A bit early, but this week we commemorate Pastor...