100 Years of Service – LORD, WHOSE LOVE IN HUMBLE SERVICE: A Brief History of Lutheran Deaconesses and Music

The following article was written by Deaconess Dawn Riske, with input from Deaconesses Robie Hillhouse and Edie Eickemeyer 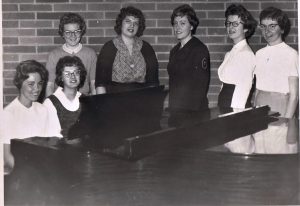 It has been overheard: “Oh, I wanted to be a Lutheran Deaconess, but I didn’t think I could.  I don’t sing very well.”  While a solid musical background is indeed a common characteristic of many Lutheran Deaconesses, it has never been a requirement for entrance into servant ministry.  That being said, anyone who experiences the ethereal sound of 100 Deaconesses singing God’s praises at an Annual Meeting knows that we hold dear Martin Luther’s words: “Next to the Word of God, the noble art of music is the greatest treasure in the world.”

We can be certain that singing hymns and chorales were an integral part of the lives of all who were consecrated within the Lutheran Deaconess Association, right from its inception in 1919.  Deaconesses grasped the value of attending Sunday services, singing God’s praises within their congregations, and using music for catechesis and care in their placements.  With the formation of the Lutheran Deaconess Conference in 1934, larger gatherings of consecrated women surely created moments when the remarkable, holy sound of Deaconesses singing together was recognized and savored.

Having Deaconess training settle in at Valparaiso University in Valparaiso, Indiana provided opportunities for Deaconess students to sing in more structured choral ensembles. Strong musical traditions converged to form high-quality experiences.  Deaconess Edie Eickemeyer remembers that  “Karna Kohtz Secker directed the campus Deaconess Choir in 1961-62.  During my freshman year, I remember Elaine Warinsky directed our choir.  We sang in Fort Wayne at the Annual Meeting of the LDA, Fall 1962.   (Audrey Vanderbles, Carole Garwood, Audrey Englert, Louise Williams and I side-swiped a triple-decker cattle truck on route 30 after that event, west of Plymouth.)”  Deaconess students sang in the Atrium of Altruria Hall at Christmas time during those years.  Life in Deaconess Hall included Informal gatherings of students around the piano singing hymns and other sacred songs.

The first official mention of a deaconess choir singing at the LDC Annual Conference is in the 1963 Minutes: “Karna Kohtz, choir director, announced times of rehearsals.” The LDC Annual Meeting was held in Waterloo, Ontario, Canada, June 25-27, 1963.

In the 1960s, Pi Delta Chi (PΔΧ) became classified as a professional

organization and no longer as a social sorority.   As such, Pi Delta Chi competed in the spring Song Fest in 1963 and in subsequent years.  Deaconesses were declared SongFest winners in 1978 and 1980.  Other students who directed student choirs during their University years were Diane Marten and Sue Wendorff.

Deaconesses with organ and piano skills would often play for Sunday services at small congregations in the Valparaiso area.  Sharing music with women’s groups and confirmation classes was a typical way of enriching classes taught during Field Work.

Deaconesses not only provided music for prayer at Deaconess Hall, but they were also often included in University Chapel Worship  During the late 1970s, Deaconess student ensembles sang for Morning Prayer.  There were times when they were reprimanded for their choices of songs and psalms shared in worship because they performed music from contemporary genres and ecumenical sources. Many Deaconess students sang and played in campus choirs, bands, and orchestras, as well as in Lutheran Youth Encounter groups and Sweet Wine.  Four Deaconess students toured Europe with the University Chorale in 1978: Sue Bergeson, Kay Brelje, Mary Carol Ojala, and Dawn Riske.  At this time, Valerie Webdell, who serves on LDA staff, frequently plays for Chapel worship.

The Deaconess Choir tour in May 1980 was remarkable.  In early 1980, those singing in the student choir prepared music with the theme “Promise.”  Sixteen Deaconess students and graduates left the day after graduation following a tour route set up by Robie Sauer and Kay Johnson.  Their travels through Illinois, Wisconsin, Minnesota, South Dakota, Colorado, Nebraska, Kansas, and Missouri had them in many congregations, talking about Deaconess ministry, singing for congregations and Consecrations, and they even sang for the wedding of Susan and Jim Nachtigal.  All returned safely two weeks later with the University van and over $700 to donate to the LDA.

Worship at diaconal gatherings is extremely important, corporate worship and is ranked among the most valuable components of our conferences.  Deaconesses prepare and share Eucharists and Prayer Services for Lutheran Deaconess Conference (LDC) Regular Annual Meeting, including the music.  Since 2014, when the LDA began consecrating men, Deacons have been doing the same for gatherings of the Community of Lutheran Deacons (CLD).  Over the past several decades, LDA musicians have helped to plan and lead music at Diakonia of the Americas and Caribbean

(DOTAC) and World DIAKONIA Conferences.   Mary Gunderson, Barb Herzinger, Jan Janzow, and Diane Marten have been major contributors to planning, preparation and performing for Conference worship.  A song composed by Judi Tyler, “Shaken by the Wind,” became the theme song for DIAKONIA 2017.  Talent shows have been hilarious and entertaining, and the Americana Hymn Festival at DIAKONIA 2017 in Chicago was a rich and memorable event. 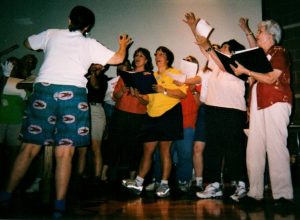 Three audio recordings made by Deaconesses, from cassettes to compact discs to .mp3 files,  have had a lasting impact within and beyond the community.  Recordings were made by Deaconesses who gathered for a week before LDC Annual Meeting for rehearsals and recording sessions. Grants from Aid Association for Lutherans/Thrivent Financial for Lutherans, Valparaiso Project on the Education and Formation of People of Faith, and Siebert Lutheran Foundation helped to cover expenses  ServantSongs was recorded at St. Paul’s Lutheran Church in 1998 in Washington D.C.  Immanuel Lutheran Church in Valparaiso hosted the Deaconesses when they recorded HealingSongs in 2003.  Bethel Lutheran Church in Middleton, Ohio provided the setting for the recording of Songs of Justice and Peace in 2010 in Cleveland.  Dawn Riske coordinated the 27 to 34 sisters who sang, directed, or played for each of the recordings.  Hymns and songs included lyrics and compositions by Becky Elfman, Jan and Frank Janzow, Dawn Riske, Patty Silva, and Cindy Stocker.

Deaconesses gather to sing, including for funerals of sisters, as at the funeral of Deaconess Evelyn Middelstadt in 2007. Professor Ed Schroeder, who went to school with Evelyn remembers, “I 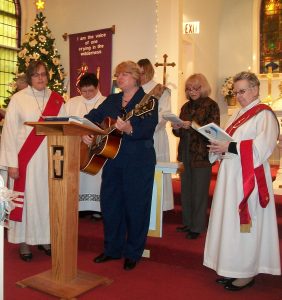 spoke with her (Evelyn’s) pastor Allen Hoger this Thursday morning about the funeral day before yesterday in Wichita.  Eighteen deaconess sisters from around the country assembled as the choir for the liturgy.”  Another pillar of the Deaconess Community, Hertha Fischer, was a strong supporter of musical endeavors within the community.  Seventeen Deaconesses sang at her funeral in May of 2014.

Hannah Koby, a member of VU’s Chorale, accompanied that group on the organ in the Castle Church, Wittenberg, Germany on the 500th anniversary of the Reformation tour in 2017.   Hannah’s original composition “Surely God is in this Place” grew out of Louise Williams’ class and features the 5 images of diakonia.  This song became the final project for her portfolio and was sung at Annual Meeting in 2018 and 2019.

As our community grows and evolves, we trust that there are musical stories yet to be told and legacies to be shared.  The musical gifts of individuals within our community come together to expand and enrich the faith and prayer life of those who are listening.  If a list of names were started of gifted and influential musicians who have received their training from the LDA, it would be difficult to know when to stop.

A hymn that has emerged as a theme song of our community is “Lord, Whose Love in Humble Service.”  The song goes on through the intersection of ministry and music, of diakonia and sung prayer: “We, your servants, bring the worship not of voice alone, but heart, consecrating to your purpose every gift that you impart.”